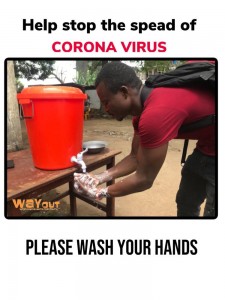 During the pandemic WAYout has stayed open, supporting members. We have made a documentary about the impact on Covid on women and girls in the provinces directed by Susan Kargbo. The documentary reveals how many girls, out of school, ended up in early marriage or women who could no longer do their normal trade had to do sex work to survive.

We have made several awareness raising music videos and posters like:-

During the two lockdowns we provided food and shelter to members and community. If the virus gets into the slums, social distancing will be impossible and it will spread at a terrifying rate. There are no social services and no free health care so we are doing our best to support and protect. 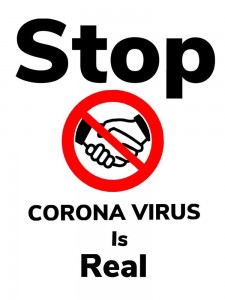 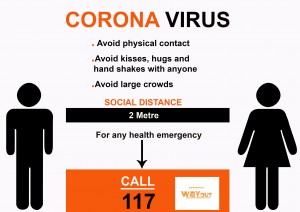 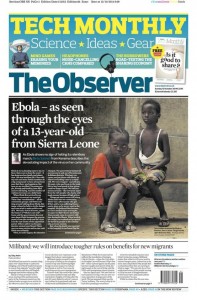 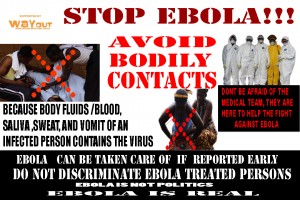 Sierra Leone was declared officially Ebola free in February 2016. It was met with a mixture of sadness and celebration. The economy was badly hit, farm food supplies damaged, businesses closed. The youth who come to WAYout lost their ‘hustles’ and we are still providing one meal a day for them. WAYout stayed open throughout, unlike most youth organisations and we provided shelter during lockdowns and food support. Four years later we have the Corona Virus to face.

On Sunday, 27th September, the last two known Ebola cases were discharged from hospital in Makeni. The new, and hopefully last, count down begins towards Ebola free status.

WAYout was one of the few youth organisations in Sierra Leone to stay open throughout the Ebola crisis. The numbers of youth coming in daily rose and they were involved in awareness raising through music and films.  Josta Hopps had a photograph published on the front page of the Observer (above) and Susan Kargbo won the Photoshop Ebola poster competition (above right). We have recorded 3 music tracks aimed at different audiences. Hip-hop Ebola by Black Street Family. WAYout Ebola Sensitisation Track and The Way group’s Ebola track. WAYout shot films for Street Child, which were broadcast on most major channels including BBC’s Newsnight, Pikin Paddy, about their Ebola children’s Unit and the UNFAO, focusing on the impact of Ebola on farmers. We have been running sessions on how you catch it, how you don’t catch it, symptoms and the importance of going to hospital as early as possible for treatment.

We are planning a series of  documentaries tackling the stigma survivors face and to help people deal with trauma.

WAYout housed about 30 street youth during the 3 day lockdown and we currently feed our members because it has become very hard for them to hustle any money. We are very grateful to Tom and Deborah Mcandrew for supporting this food programme.  It was especially appreciated at Christmas

So we are appealing for your continued support in this difficult time. This ebola crisis  strained our resources and we continue to need your help.
Donations to Paypal– ( you don’t need a paypal account, you can pay by credit card) or bmycharity
BACKGROUND

As of 15th February 2015, according to the Ministry of Health, there have been 8239 confirmed cases and 3421 deaths from Ebola. Healthcare workers are visibly struggling, the response to the outbreak has been damned as “lethally inadequate” and although the numbers of new cases were dropping they have now levelled out again.

Deaths from Ebola are badly affecting communities and so are actions taken to try and control the disease. The farming community has been particularly badly hit. The three day lockdown came at a time when they would normally harvest crops. Instead crops were ruined and eaten by bush animals. Bush animals used to be killed, both to protect crops and as a source of food, but the ban on killing bushmeat has meant crops being eaten and a loss of food and livelihoods, especially for women. Gatherings were banned so farming methods that require group labour could not go ahead. People are so hungry they are eating the seeds they should be planting, selling small livestock like sheep and goats in order to buy food or going hungry.

The stories of healthcare workers being stretched beyond breaking point are countless.

Dr Christopher Dye of the WHO says “If current trends persist we would be seeing not hundreds of cases per week, but thousands of cases per week and that is terribly disturbing.” The World Health Organization is using an educated guess of 20,000 cases before the end and for the first time since the outbreak began, the majority of new cases are outside the epicentres. Officially the World Health Organization is saying the outbreak can be contained in six to nine months. But that is based on getting the resources to tackle the outbreak, which are currently stretched too thinly to contain Ebola.

Prof Neil Ferguson, the director of the UK Medical Research Council’s centre for outbreak analysis at Imperial College London, says “The authorities are completely overwhelmed. The epidemic is increasing, it’s still growing exponentially. This summer there have been many globally important news stories in Ukraine and the Middle East, but what we see unfolding in West Africa is a catastrophe to the population, killing thousands in the region and we’re now seeing a breakdown of the fragile healthcare system.” Prof Jonathan Ball, a virologist at the University of Nottingham, describes the situation as “desperate”. His concern is that the virus is being given its first major opportunity to adapt to thrive in people.

The malaria season, which is generally in September and October in West Africa, is now starting. Will there be capacity to treat patients with malaria? Will people infected with malaria seek treatment if the nearest hospital is rammed with suspected Ebola cases? How will healthcare workers cope when malaria and Ebola both present with similar symptoms?

Sierra Leone Finance Minister Kaifala Marah told reporters “the Ebola crisis had devastated the economy, with growth projections pared back to single digits for the first time since the country’s mining boom started in 2011.”