Josta is a freelance,  professional, Sierra Leonean filmmaker and photographer and member of staff at WAYout. His photographs have been exhibited in London, Manchester and the USA and appeared on magazine front pages and his films are broadcast and appear regularly in International Festivals. Clients include Street Child, UNFAO,WaterAid

Currently his video for the WAYout poets “Homeless” is in several international festivals.

Music videos “Static” and “Bread ‘n’ Butter” are wowing audiences; one for it’s energy and the other for it’s images shot on the vast Bume rubbish dump in Freetown. 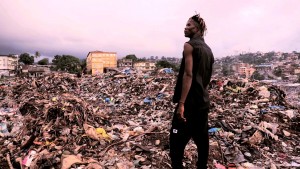 Josta lived on the streets of Freetown for 12 years before finding WAYout. His talent was immediately obvious and he now has an extensive list of credits. He also teaches regularly, other less privileged and street youth at WAYout. He is available as a shooter, director or photographer and can be booked through hazel@wayoutarts.org

in 2018 he produced a Television series for AYV TV called ‘The Vet’ and in 2013 he wrote, directed and edited  feature film “Way Out, The Longest Dream“.

Josta has worked for Street Child, Children in Crisis, Music Action International, WaterAid and other NGOs.

Josta supported shoots with Hazel Chandler to produce short films about families affected by ebola for Street Child – these films were then aired on the BBC, Channel 4, ITV, Sky, and other international TV channels.

Killing Me With Love- Meeky