WAYout was set up in 2008 by Michael Chandler, following a visit to Sierra Leone when he met and interviewed many musicians and listened to their problems. But he was also inspired by their commitment and determination to carry on making music, often with a political message, despite the lack of studios and equipment. 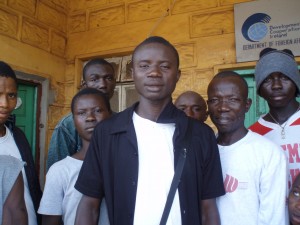 Yumyum with his camera 2005

But the roots of WAYout go back to 2005, when Hazel Chandler started making a film about street youth in Kenema, on the Liberian border. She gave gang leader, Yumyum, a small camera and asked him to record their lives- thinking he would sell it but if she was lucky he might record for a couple of days first. He never sold the camera and went on to shoot 100 hours of footage, raw, candid and sometimes brutal. That camera became his badge of honour and being asked to tell his story was the beginning of a change from which there would be no turning back. This was the inspiration to give other people cameras and tell them their stories are important and this is where the seed was planted to start WAYout .

If you want to contact us email info@wayoutarts.org or write to