WAYout has been running Music Therapy (MT) sessions in Sierra Leone’s biggest psychiatric hospital- Kissi Psychiatric Teaching Hospital- for the past year. A recent assessment from the staff at the hospital who manage and arrange the sessions says the sessions have:

We hope to build on the success of this work

WAYout works with some very vulnerable young people and we are aware of a need for a greater understanding of mental health issues. We ran the first mental illness film competition and pitching forum in 2013.  This was a pioneering project for Sierra Leone. Two of the films made were in the Opun Yu Yi Human Rights Film Festival and one, ‘My Side‘, won best documentary prize and was shown at the Mental health conference organised by The Mental Health Commission.

Since then things have moved on and got better but there is a long way to go. We assisted in the shooting of King’s College London’s four short films about mental health, made a short film about Martin Sinesie, a mental health nurse from Bonthe and we run regular workshops to raise awareness and tackle stigma.
Sometimes WAYout members have serious mental health problems but cannot afford treatment or treatment is not available. One member found himself chained up in a church hospital and on his release recorded “Psycho Yard” about the experience.
My Side by Steven Tommy
I am Bipolar by Catherine
Mental Martin
Psycho Yard by Shargwan video by Gibrilla Kamara 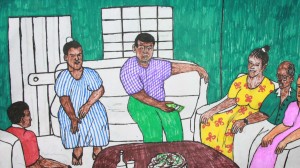