Unity and The Way film group 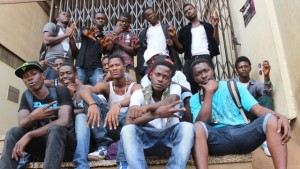 The Way group was a filmmaking and music group of street youth from Central Freetown.  Motto “We Can”. They recently re-invented themselves as The Unity Film Group with many new members.

The Way film group was one of WAYout’s success stories- Sinneh Sesay and Mohamed Kamara, who led the group, now work full time at AYV TV.  Schooler B, Gas P and JJ are working freelance and MSK and Alusine are employed at WAYout.

Started in 2013 when WAYout filmmaker, Alimamy Kamara, wanted to make a follow up to the documentary he made about the street youth who lived outside his home. But they decided they wanted to make their own films, not be the subject of them. So The Way film group was born.  They had a film, “No Strings Attached“, in the prestigious Reel Youth Festival in Vancouver in October 2014. Earlier this year they won an international award for their film on ‘sex and alcohol’ for ‘Young Voices Against Poverty‘. They went on to make a drama- “Pirates”- a pirate ship thriller. 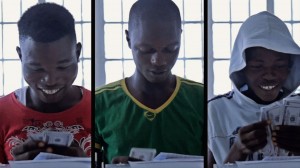 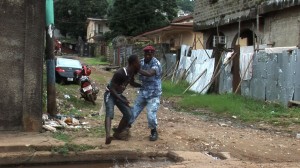 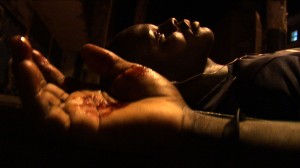 Their first film The Way won awards in film festivals and was the star attraction at Don Bosco’s street youth celebration.  Their music video for their track “Nor Blame We” was in the Opin Yu Yi festival.
In 2011, three teenage boys, who live on the street in Freetown,  made a short documentary about their lives, ‘Broom and Basket‘. Then they decided to make a thriller, based on their lives. It’s a tale of hardship, friendship, betrayal and reconciliation. Shooting was held up when Tone Die was arrested. No sooner had he come out of jail than Bullet went in, and then Cool Jungle. J.J. replaced Cool Jungle. One day the shoot was cancelled because Bullet’s only set of clothes were stolen. Two days later Bullet was beaten up and the bruises had to be incorporated into the script. Ducking between the down pours of rainy season and the trials of daily life and it’s a miracle anything got shot at all. 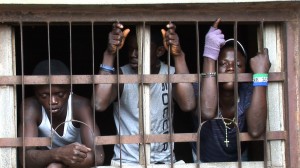 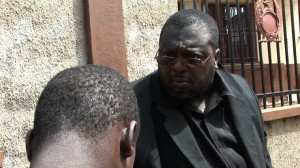 Well known Sierra Leonean actor, Desmond Finney, made a guest appearance as an older man looking back on his life on the street and the finished short premiered at the Opun Yu Yi festival in March 2013 where it won an award. This was just the beginning. The Way group was invited to show the film and speak at various venues, including Don Bosco homes for street children. 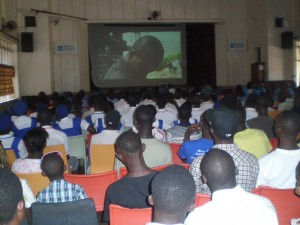 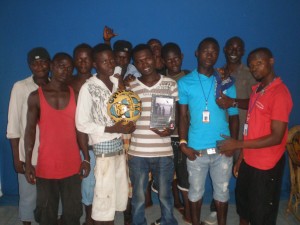 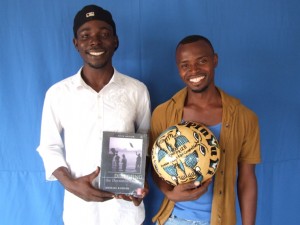 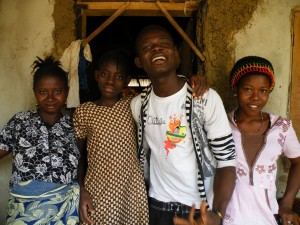 JJ with his sisters

JJ ran away when he was ten after an argument with his sister. He didn’t even say goodbye to his mother who spent the next eight years looking for him. JJ sent money and photos home when he could afford it but his mother never received  them so did not know if he was alive or dead. JJ was reunited with his family and is now in their lives and off the streets.