We are very very sad to announce that WAYout member known as Facebook (Amara Kamara) died on Saturday 21st in a road traffic accident. Facebook joined WAYout when he was 17, he was kind, funny, creative, helpful and had big dreams for the future. He was well loved by all and he will be greatly missed 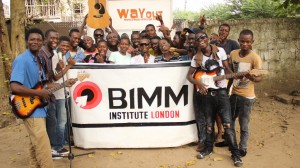 WAYout has a new home!

Check out these first photo for WAYout’s brand new centre in Freetown.

Building works are underway on the studio and the new Centre is shaping up nicely.