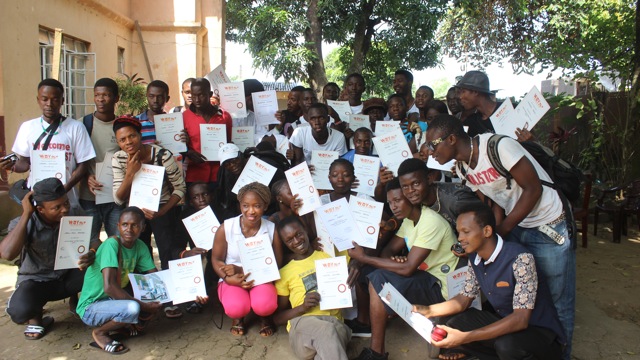 WAYout works  with street youth and disadvantaged young people, offering them the opportunity to have a voice through creative expression and to learn skills that can lead to employment or re-engagement with education or simply open the door back home. We have an open door policy and no time limit on how long members stay with us. We find that it takes up to two years for someone who has been on the streets for years to realise that they are capable of learning skills and to start to change their lives. Once they start to achieve something they often ask for support to go back home and be reunited with their families or communities for the first time in years and the next step is to try and get off the street. We have a grants system to support those wanting to get off the street into homes or travel to meet family.

We are embedded in our local community and many of the youth we work with sleep nearby. We hold regular screenings of films we make to communities nearby with great success. We have a presence at local events- marriages, funerals, birthdays and are often asked to film them. It is important that we are seen as members of the community with a responsibility to it.

Approximately 20% of the 18-35 year olds we work with were combatants during the ten year conflict – a volatile and excluded minority who felt society had rejected them, who were unemployed and had nowhere to live.  But now, following the opportunities offered them by WAYout, they have other goals in life and people are no longer afraid of them. We are committed to continue working with ex combatants.

We have a smaller branch in Kissi Town, the old refugee camp which is now home to 22,000 people. Youth unemployment is 70% and the only local work is coal pot making. There is no power except that provided by a few local generators and no running water. Many NGOs pulled out after the war and Kissi Town felt forgotten. We run editing, camera, photoshop classes there and take the mobile studio out when we can.

WAYout is running women’s projects in the provinces. Following Susan Kargbo’s making of a film about domestic abuse, the women involved asked us to teach them how to make films. We are doing just that and they have made several short dramas to raise awareness of fistula and sexually transmitted diseases and are part of an ongoing study to see if films with a local voice have more impact. They now want to start their own media centre.

WAYout now has a mobile studio which visits hard to reach places with no recording facilities. Turning a bedroom or store room into a temporary studio, we record music for the may talented, forgotten youth in the provinces.

WAYout now has a small studio inside the male prison in Freetown, which has over 1,000 inmates. Following visits with the mobile studio, prison officials invited us to set up and gave us a small room. They observed that those taking part were calmer and more sociable with each other and it also gives inmates something to work towards when they get out.

We also work in the female prison, with a choir. We are working towards an exhibition of their work in drawing, design and beadwork with Advocaid.

WAYout is not about statistics although we are proud to quote them-(see below). For us it is about knowing the individuals and not giving up on them. We are prepared to keep trying until we find what works for each young person.  We have had considerable success supporting youth to change their lives. 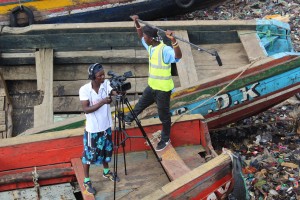 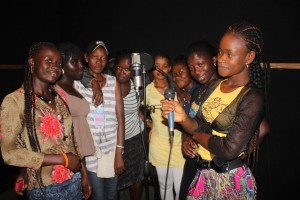 WAYout’s flagship project is based in Sierra Leone using music, film and arts to enable disadvantaged and conflict affected young people to express themselves. We provide studio space, access to equipment, training and opportunities so that they can tell their stories or explore issues that matter to them. The young people benefit from the projects creatively, socially and economically. Creatively, providing an opportunity to produce work and explore their experiences and talents;  socially, providing an opportunity to voice their opinions and feelings and economically, providing them with job opportunities and security for their future.

Editing and shooting facilities- free to our users

Support and advice- technical or personal

Competitions- WAYout runs a variety of arts competitions.
WAYout provides music scholarships to students wanting to study at Ballanta, the only music academy in Sierra Leone.